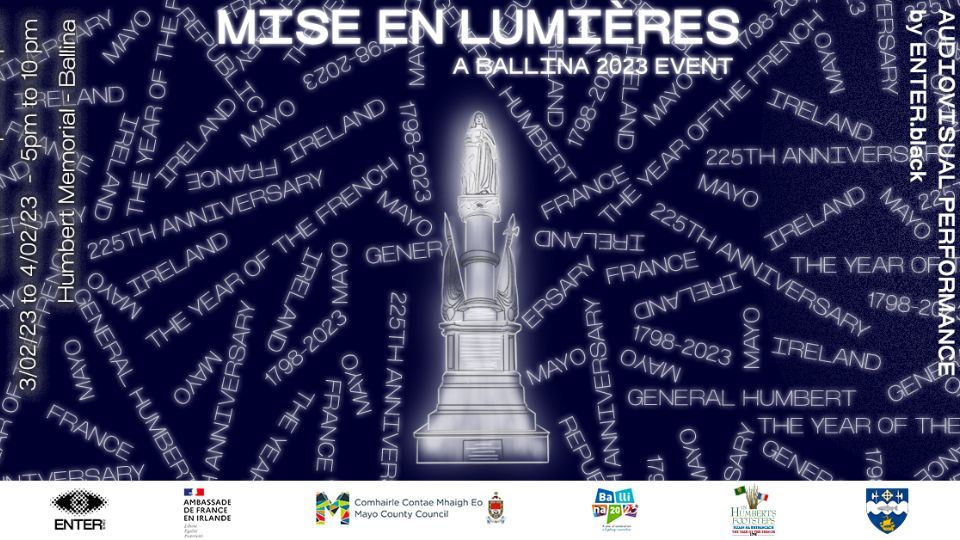 Mise en Lumières is an adapted audiovisual light installation by ENTER.black, a French artistic collective dedicated to development of immersive experiences. The installation, which uses light and sound, will be on display at the Humbert Memorial Monument (the Maid of Erin), Humbert St., Ballina, from 6pm to 10pm each evening from Thursday, February 2 to Saturday, February 4.

Mise en Lumières has been produced by French creative digital start-up ENTER.black, and highlights the architectural & historical features of the monument. Initially presented at the Palais Galliera (Musée de la Mode, Paris), the performance now travels for the first time in Europe, to Ireland, where it has been adapted to The Humbert Memorial (Ballina) to celebrate the Franco-Irish relationship and the 225th anniversary of the French landing in nearby Kilcummin and Killala, Co. Mayo, led by General Humbert on 22nd of August 1798.

The performance will mark 200 years since the death of General Jean Humbert, who during the 1798 Rebellion, landed with a French Army at Kilcummin on August 22, 1798 and establishing the first Republic in Ireland ‘The Republic of Connaught’. The event will also mark 225 years since Humbert and his army came ashore, and made their way from Kilcummin, through Ballina, Castlebar and on to Ballinamuck, where they were eventually defeated.

Ballina is delighted to welcome some very special guests to switch on the installation, The French Ambassador to Ireland, HE Vincent Guérend, Mariam Diallo, Cultural Counsellor at the French Embassy and  Catherine Gagneux, French Honorary Consul Connacht & Donegal.

The event is the first event of a year-long partnership programme, the Year of the French or Bliain na bhFrancach, a collaboration between Ballina 2023, the French Embassy, In Humbert’s Footsteps. Over the course of the year, some special events will be hosted with guests from Athis-Mons, Ireland’s twin town in France.